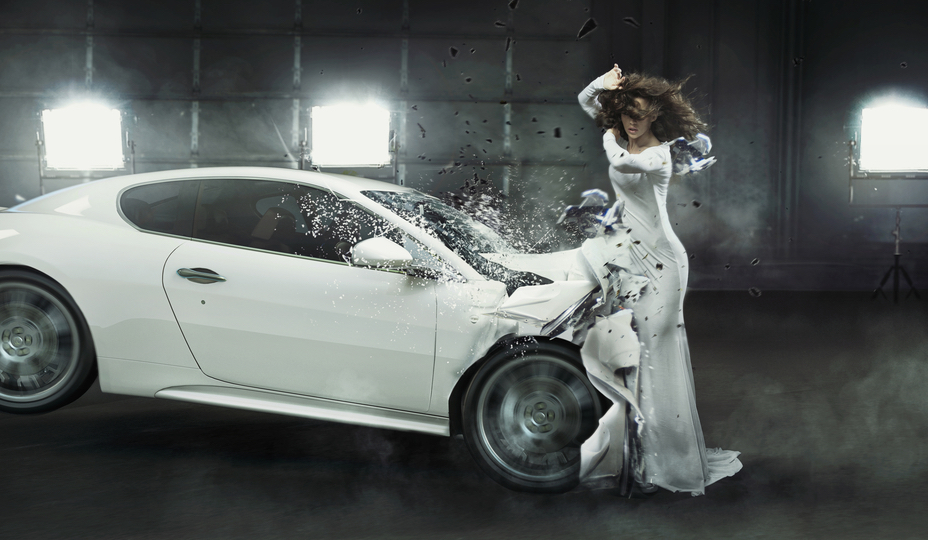 Car companies use crash test dummies when they want to figure out how to make their vehicles safer.

Comedians do it too. They always test their new material in crappy bars first. They see what bombs, they take what works, they polish it, and test it again and again and again until it’s top class, until it’s ready. What comes out at Spanky’s Pub isn’t going into the same set as Madison Square Garden.

Here’s what’s weird. Despite the fact that comedians have their scripts memorized, they NEVER sound rehearsed.

On the contrary, they sound perfectly natural.

What’s more, they know their routine SO WELL, that nothing throws them off. If an idiot heckles them, they can drive him to the ground without missing a beat.

You can bet by the time Louis CK hit the big stage with his stand-up piece on dating, he’d been cleaning it up on the shit circuit a long, long time.

If the pros are doing it, you should be too.

Using “crash test dummies” is a great way to crash and burn where it doesn’t matter.

And if it works for car companies, stand-up comedians and a whole lot of other industries, you can bet it’s gonna work for your dating strategy too.

Here’s the thing: whenever you’re trying something out for the first time, it’s virtually guaranteed you’re gonna suck…

It happens for a number of reasons:

2. You haven’t built the skill set

4. And most importantly, you don’t know how to react when stuff blows up in your face (improvisation).

The only way you’re going to overcome those obstacles is by testing out your approach over and over again.

And you’ve got to do it in low stakes scenarios so it doesn’t hurt too much.

Imagine if you could train to be a professional boxer without the risk of getting punched in the face. That’s the kind of power we’re talking about.

By now you’re probably nodding and saying, “Yeah I get it Tripp; you want me to go to the mall and practice by hitting on girls I’m not really interested in. About a dozen dating coaches gave me that advice before you AND IT SUCKED. Thanks a lot”.

No man. That’s not what I want you to do.

Don’t get me wrong, I’m not saying it’s bad advice. But that bit comes later.

There’s other stuff you need to do first, otherwise you won’t be getting any benefit out of that exercise.

This is one of the central things in what I teach—you don’t need cheesy pick-up lines and sneaky tactics to get the women you want. You can do it all by being genuine, authentic and honest.

And how do you do that?

By working on becoming the best version of yourself no matter who you interact with.

The world is your laboratory.

Here’s what I want you to do from now on—treat EVERYONE as your crash test dummy.

Every interaction you have from this point on is going to be a test in human interaction. You will approach it in an almost clinical way.

You will test one thing at a time, tweak it, get it right, and then move onto the next thing.

1. Pick a basic action. Start with something ridiculously simple, like smiling.

2. Take that action apart to understand how it works. In the case of smiling, you need to figure out what makes a smile look genuine as opposed to fake, or (God forbid) creepy. So:

b. Understand what’s happening with the face in each case. For instance, you’ll notice that a genuine smile happens mostly in the eyes rather than the mouth. On the other hand, a creepy smile works the mouth but not the eyes.

c. Practice the different kinds of smiles in the mirror; yes, even the creepy ones. I want you to get used to the sensations you get in your face for each of the smiles, and turn them into muscle memory. That way, if you flash a creepy smile, you can catch yourself and change it into a genuine smile.

3. Apply your new skill out in the world on everyone you meet (maybe not on the thug breaking into your neighbor’s sedan at 3 am, but you get what I mean).

4. Observe the results and adjust accordingly.

Feeling nauseous at the thought of so much socializing? Don’t. You’ll find that most people you smile at will plain ignore you.

That’s fine and perfectly normal. It’s also a good thing for you, because it helps you learn to not take rejection personally—step by step, you’ll build thick skin, which is essential for approaching women.

The important thing is to keep testing.

Some of this stuff can be really counterintuitive. For instance, you might think that a wide smile makes you look weird; but then you test it out and find that people react more warmly to it.

You need to keep testing and polishing, getting rid of what bombs, keeping what works, and making it better. You’re part scientist, part comedian, all results.

After a while you’ll find that you’ve mastered an awesome smile and people tend to warm up to you faster.

Even better, your confidence has gone up a notch!

Remember, the less things you need to think (or worry) about when approaching a woman, the smoother you’re gonna be and the more natural you’ll sound. Competence breeds confidence.

This is the secret to becoming naturally attractive without ever needing to use cheesy pick-up lines or sneaky tricks.

Pick another skill and repeat the process.

You get the idea. Now, you need to apply this same approach to your other social skills.

Pick the next most basic thing—saying “Hi” to someone. Whenever someone smiles at you, say “Hi.”

Experiment with your voice. Try to inject different levels of enthusiasm into the greeting. Try all sorts of stuff.

Here are some more things you can test:

a. How long to keep it

b. Whether to break it off first

c. How to break it off

a. How close you can get to people without them feeling uncomfortable

b. Whether the orientation of your body affects how close you can get to people before they start backing off, e.g. When you’re facing someone directly, you might not be able to move too close, but you could try a sideways orientation.

a. When in conversation, try to pause before replying

b. Test the length of your pauses to see how people respond

As you master the little things, you can move up to more “intimate” skills such as hugging. If you want to get a jump-start, you can check out my video on “How To Hug a Girl”.

The whole point is to work with small building blocks and testing them in a low stakes environment. It’s the little skills that eventually build up to form your cool, charming demeanor.

I mentioned this earlier but you might have missed it—listen up, because it’s really important. Only test one variable at a time!

Don’t get carried away trying all sorts of things at once.

If you’re trying more than one thing, you won’t know what’s working, and that will screw you up.

Say you spend the whole day both standing closer to people when you greet them AND waiting longer to reply, and find that people respond more favorably than the day before.

Well, guess what? Now you have to spend a couple extra days testing because you can’t say for sure what’s more important—proximity or pause duration.

Keep it simple; only test one new skill at a time and avoid “winging it.” This stuff is important.

So, here’s the list of takeaways in case you need a refresher or want to revisit it later.

2. Dating is a collection of skills that you can test and improve—one by one—to build competence and confidence.

3. You are a scientist, the world is your laboratory and everyone is your crash test dummy.

4. Pick one skill you’d like to improve (e.g. smiling), take it apart, analyze its separate parts, and then test out different variations on everyone.

5. Once you’ve improved one skill, move on to the next and repeat the process.

6. Only test one new skill at a time.

Ok, you’ve got all you need. Now you can keep reading this post over and over hoping a goddess will magically fall in your lap, or you can go out there and do something useful with this knowledge by taking action.

Look, learning is good, but practice is what’s gonna get you results.

So, I want you to commit right now.

Want to learn secrets about women and dating most men will never know…? Everything you need to know about attracting and dating the kind of women you truly desire is in my program Hooked. This is my step-by-step course for turning yourself into the type of man that women find naturally attractive while still being your genuine self. It comes with a bunch of bonuses including access to my private Facebook group Tripp’s Corner and it’s backed by a 60-day money back guarantee. Click here to learn more about my program Hooked.